Adjustments to the Periodic Table of Form

In an in-depth Core77 article, Gray Holland of Alchemy Labs provides a geometrical breakdown of style differences.  Fig. 1 below cites specific examples ranging from the F-22 Raptor to the MacBook Pro. 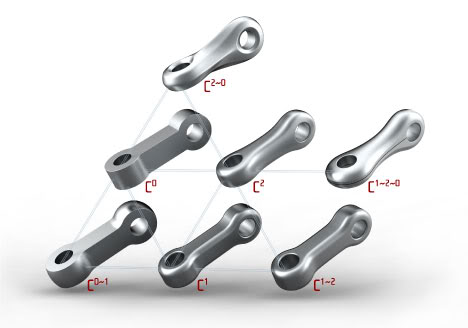 Now while we at CCD agree with Holland that an analysis of form can be a fruit-filled discussion, we have some objections to his take on design forms. The sticking point is not so much in the renderings above in Fig. 1, but in the distinct divide he posits in Fig. 2:

Here Holland has divided design and engineering. To even suggest that design is separate from engineering undermines the entire definition of industrial design. It immediately places design in a surface-styling role as opposed to offering legitimacy to the dialectic process of design, research, testing, and so on.  Is he saying that “designers” just make pretty pictures all day? Account managers just jet-set and hob-nob all day, right?

Of course not.  These are occupational stereotypes, and the one of designer is perpetuated whenever the notion of design is characterized as a merely aesthetic function.   CCD’s modified concept of the Yin and Yang is in Fig. 3. 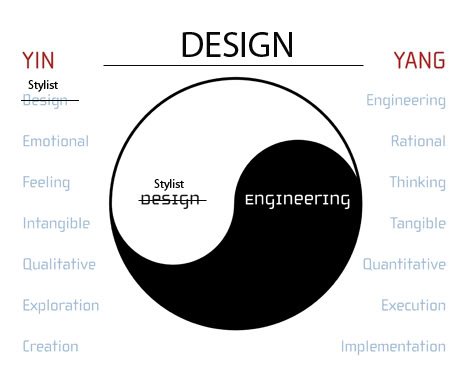 A more dialectic and more nuanced conceptualization can be found in Design For The Real World, by designer-educator Victor Papanek.  Papanek illustrated what he called the Function Complex (Fig. 4).  In such, all other variables are contained, from engineering to aesthetics. We need to be careful, as designers, when calling out these roles casually.  A large part of our business includes doing tangible qualitative research and rational analysis of form.

Here we bypass the dichotomy of “design” and “engineering” altogether and find a circular iteration of actions and analysis.  Where specialization encounters blind spots, Generalists are always right behind, grabbing on to the loose ends in order to refine the problems.

This process is seemingly indefinite. As Henry Petroski illustrated in The Evolution of Useful Things, the hammer is a perfect example of how form does not follow function, but rather failure. Where one hammer failed in a specialization, another is right there ready to pick up the slack.  He points to the exhaustive variations of hammer types in Ron Baird volume The Hammer: The King of Tools. In his analysis too, aesthetics, use, method, and implementation are all at play together, not separate.

We hope our clarification adds a little more comprehension to the field.  Sure we at CCD enjoy the aesthetic experimentation of making overly large swooping speed forms and clumsy robots for our personal satisfaction, with not a lot of concern for function. And on the other side, we also spend loads of time researching wonky details of material science:  the expansion percentages of plastics, powder-coating technologies, and so forth.  In a real development process both tendencies are important parts of a designer’s work.